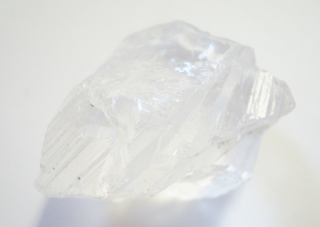 
Today we look at Nirvana Quartz, also called Ice Quartz, Himalayan Ice Quartz, Iceberg Quartz, Glacial Quartz, Lemurian Scalar Quartz, and Growth Interference Quartz. The word "nirvana," by the way, refers to a concept from Buddhism--the realization of an enlightened and ego free state, where one has moved beyond experiencing earth plane living. In various Indian religions nirvana is equivalent to the term moksha, and carries similar meaning to the Buddhist concept.

Nirvana quartz is harvested in the Himalayan Mountain regions of Tibet and India; it grows beneath the glacial ice found there. Glacial ice by the way, begins as snow, but sits so long that it compresses into ice. Unfortunately, in recent times the glacial ice formations of the Himalayas began melting and shifting (at an alarming rate, I might add). Subsequently this type of quartz was only recently discovered; that, in the early 2000s. Though primarily harvested in Tibet and India, ice quartz in theory could also be found in Pakistan, Afghanistan, Bhutan, and Nepal, as the Himalayan mountain range passes through all. As a matter of fact, it could be mined anywhere in the world where glacial ice has receded, which explains why it is also mined in mountainous regions of Brazil.

Imagine living high amongst the mountain ranges of the Himalayas, or any mountains--the view is majestic, you are exposed only to the elements, the sun, stars and moon, and the day and night view of the open sky. Silence is all you'd hear, but for the infinitesimally quiet sounds of the universe, and the earth itself. If you were a stone and were born into and grew up in such an environment (and were cocooned in ice), this synoptic overview would state volumes about the nature of your energies. Keywords born of this: nobility, majesty, growth, awareness, spiritual, ascension, silence, peace, serenity, stillness, strength, solar, lunar, celestial, day & night (dualities, polarities, complete cycles), and clarity (ice). These are not, however, the only keywords relative to this stone, but are the ones relative to the specific overview offered prior.


A video I found on YouTube, with examples of nirvana quartz.


The unusual formations some stones have can be explained easily enough; they grew against ice, other crystals, rock, or all. Then shifting happens, more shifting, phases sometimes of accelerated development, perhaps inclusions are incorporated, and there is water etching on some. These things together can create some amazing formations and stone textures. Some of these stones are unusually clear, some less so; others look rather beaten up.

Nirvana quartz can grow in large masses or as smaller pieces. When harvested from a massive piece the pieces look almost like broken glass, but the fractures are less conchoidal than how glass breaks. Defined pieces may come as points, or with no termination at all. Often you can find a piece that grew up against one or more other crystals (growth interference), but the surface has an unusual texture as if the stone or ice it grew up against as well as itself, were moving.

Some pieces of nirvana quartz have surfaces that feel so smooth to the touch, that it's hard to believe they are real stone. Others are pitted, and it's not rare to find stones of this type with really chewed up looking surfaces. Himalayan ice quartz may have inclusions, and of the colors it can be, besides clear which is most common, pink is next most commonly found. Often pink Himalayan ice quartz is further included with iron deposits. 
Ice quartz assists us to grow in spirit, in awareness, and in person. As we grow in spirit, subsequently, our psychic awareness and intuitive skills blossom. When we are working to accept and adapt, to personally transcend the difficulty of a trying circumstance and take it for what it is, this stone can help us find inner peace. It will especially help those who are at the mercy of others or of circumstance, who are having difficulty accepting change, to adapt. When someone has moved forth from the trauma of a difficult relationship, job, or other hardship, it will help them recenter and reset and to leave the past behind; it will gently urge them to find required resources. Ice quartz will also assist in preparing for change before the fact.

With all illnesses, it creates a harmonious flow of energies between the chakra centers, and has the body working more optimally to heal itself. In the case of more aggressive illness, it will guide one to higher understanding and acceptance, and will also guide them to know how to best navigate their journey.

For meditation, it will help a person to appropriately still or otherwise address, the thoughts, internal dialogue, and other mental clutter, that may otherwise obstruct; this was carefully worded because those thoughts are presented to us as a learning experience and we don't necessarily want to circumvent them entirely, but we do need to learn to acknowledge their message quickly then return to mental stillness. When one has many questions about their own personal truths--hows, whys, and matters of what is right for them to serve in their Highest Will, this stone is a veritable key to wisdom. With its high vibration, it facilitates accessing information from all realms beyond our own. Additionally nirvana quartz assists one to prepare for communications with daemons, angels, and deities; note though, that it is not beneficial to use it in actual ritual for each and every entity. Teachers and gurus will energetically resonate with this stone, and others will rise to meet them in working with it. Basically, if you have mountains you intend to climb, this is a stone for you.

The energy of nirvana quartz is somewhat "magnetic," so if someone is working in a field where they need the support of others, this stone will help them draw it, so long as their intent is true. If someone is working on astral travel and has been blocked, it's a good idea for them to work with ice quartz; it will raise their vibrational frequency, which is likely necessary.

Ice quartz most effectively targets crown chakra issues, but also heart and higher heart issues. As with all high energy stones, this one will most likely leave you in need of grounding.

Note that within the keywords offered earlier into this piece, were dualities, polarities, and complete cycles; also, clarity. Clarity I didn't use as a word in the description of this crystal's properties but its meaning is present just the same, in terms of spiritual clarity, or ascension. The other words, however, perhaps do need elaboration, but not so much. Magicians are wise; when drawn to this stone, they will know to seek answers in comparing dualities; and in re to cycles, that in one process there may seemingly be no end, but the process has not yet completed. As for polarities; if one is not at the top of the mountain, they are at the bottom, at the very least looking up.

Another thing to remember in magick that pertains to this stone, and all stones, is that their properties generally work both forward and in reverse with the same power. So a stone like this that would obviously be good to help one advance in their career and reach all kinds of goals, would also be good in baneful magick to make that mountain pretty slippery for someone trying to ascend, bring someone down off their high horse, or bring someone down, period. It would be best used with a stone appropriate to the specific magick being done, but to me, in these instances of baneful magick I'd suggest using either smoky nirvana quartz alone, or using clear nirvana quartz with black tourmaline or black obsidian. Each of these black stones is great for grounding, and obsidian has a mirroring, or reversal quality.

For your consideration: I often have pieces of nirvana quartz in my Etsy store. Feel free to browse.

Posted by Metaphysicality Inc at 2:33:00 PM No comments: