The Ace of Swords, RWS and Thoth Tarot Card Meaning 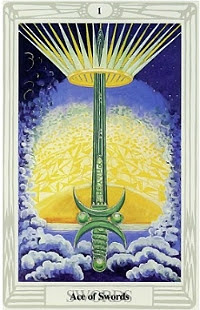 Occult Name: The Root of the Powers of Air
Ace of Swords in timing: One week; or the season of summer
Qabalah: The airy aspect of Kether
Reading with Playing Cards: Equivalent to the Ace of Spades
Astrological: Gemini, Libra and Aquarius

The Ace of Swords is more complex than most cards, thus a different approach than usual will be taken to explain it (i.e., this post is long). While the Aces are all considered positive omens, this one comes across as less so. It identifies with the other Aces in the way that it possesses the raw essence of its element and suit. Where it differs, is that to get to the positive new beginning that the other Aces express so strongly; sometimes, we may first need to take action to extricate ourselves from a predicament. Sometimes it's simply a matter of making a tweak or two that allows us to to begin on a fresh, new page. This card offers a sense that victory is possible provided that the right steps are taken.

Other times, this card tells us that we have made it through a troublesome circumstance and have come out on top, or that our initial assessment of how to move forth was right on, and we're where we need to be. Its primary messages would be for one to use logic and reasoning, and to know that they have what it takes to win, regardless of that it may not seem possible. As well, sometimes we delude ourselves in denial of the facts before us. This card tells us that when we do, we obfuscate the truth of our respective identity, universe, and spirituality.

The RWS Ace of  Swords


A hand reaches out of a dark cloud within the Ace of Swords. The sword it is holding has a crown, and there is an olive branch and palm foliage hanging from it. The dark grey cloud refers to heaviness of thought, which denotes a matter of difficulty; that the cloud (and the sky) are neutral in hue, references impartiality, or neutrality. The white rays emanating from the hand depict illumination, understanding, purity, and also new beginnings.

The sword is dual edged; one side is just, the other may hack wildly and cruelly out of fear. (The blue refers to intelligence, reason and logic, wisdom, loyalty, and stability. The white refers to intuition, innocence and purity, illumination, light, and sincerity). The sword itself is both a weapon of war and a weapon of peace. Sometimes it takes such a tool to bring peace about; but not in actually using it, as war begets war. It is in the presence of the potentiality for counter or greater issue (threat of war), that sometimes peace is established. Within this concept lies the recommendation of standing one's ground, and contextually speaking, that's to defend their will.

There are Yods floating about, they have fallen from the skies. Yods represent Divine energies and Divine consciousness, and also awareness. In these things exists the potentiality for magick, in the way that magick is consciously creating change that aligns with one's will. They also represent the path of Yod, which connects Chesed to Tiphareth (the path of the Hermit); a significant message in this, is that true justice serves the Unity (everyone). Six is a number of perfection and completion (there are six Yods).

The sword entering the crown, speaks of sexual union, which in turn alludes to the uniting of opposing forces; and the crown itself refers to victory, mastery, and Kether. The olive branch is symbolic of peace, goodwill, friendship, and strength; also crop yields, and in that, abundance. As well the olive branch alludes to a teaching from the Talmud, which goes "Better, let my food be as bitter as an olive from the hands of G-d and not as sweet as honey from the hands of flesh and blood"; this quote references truth. The palm frond refers to victory, peace, longevity and immortality; from this emerges a message that victory is achieved through persistence. We see small hills in the foreground, which denote that through life's ongoing journey there will be issues at times. If we look at them as being mere challenges, we can move beyond them. If not, each one becomes a mountain, that can block us until we learn to see it differently. Astrologically speaking, Gemini, Libra and Aquarius refer to mental acuity, diplomacy and tact, and communication skills.


The Ace of Swords Thoth


The symbolism of the Thoth Ace of Swords, is as rich as that of the RWS; hence here the symbolism will be explained symbol by symbol as well.

The three orbs symbolize: a triangle (strength), a pyramid (spiritual growth); and also the three Qabalistic triads. In this context there is an intellectual flow originating from Kether, passing through each of the triads. This urges one to consider how thoughts affect what manifests in their world, and also what needs to be deconstructed thoughtwise--which is, naturally, that which serves to stunt rational and harmonious thought and action.

The sun's rays shine upon water. The water shown is emotion, which in and of itself does not allow for rational thought and action. However, the sun's rays shine strongly upon the water offsetting it; visually speaking, it is a setting for inspired thinking. The scene is surrounded by clouds, which represent problems, fears, and destructive thought being broken through; they are tinged with the indigo of wisdom, which spawns solution. The crescent moons, in that they represent moon phases, allude to time; and they depict the female aspect within creation, which adds another aspect of harmony to this male card. Additionally, they symbolize intuition.

The word "Thelema," states that true justice aligns with will, and as well does not block the will of others. The crown itself refers to Kether. The twenty two rays emanating from it refer to the paths of the Qabalistic Tree, which speak of spiritual growth, and also an ongoing journey resulting in enlightenment. The serpent represents traversing the 22 paths, and in that, infinity; it also represents knowledge, wisdom and mastery.

To summarize the this card succinctly, it could be said that one's thoughts and subsequent actions can align with one's true will, and thus will support them in their endeavors and to grow spiritually, or conversely will counter them and stunt them in various ways.

The Ace of Swords Dignified and Upright

The Ace of Swords Ill Dignified and Reversed