The Virgin and the Whore: Faces of the Nondual Divine Feminine in Thelema 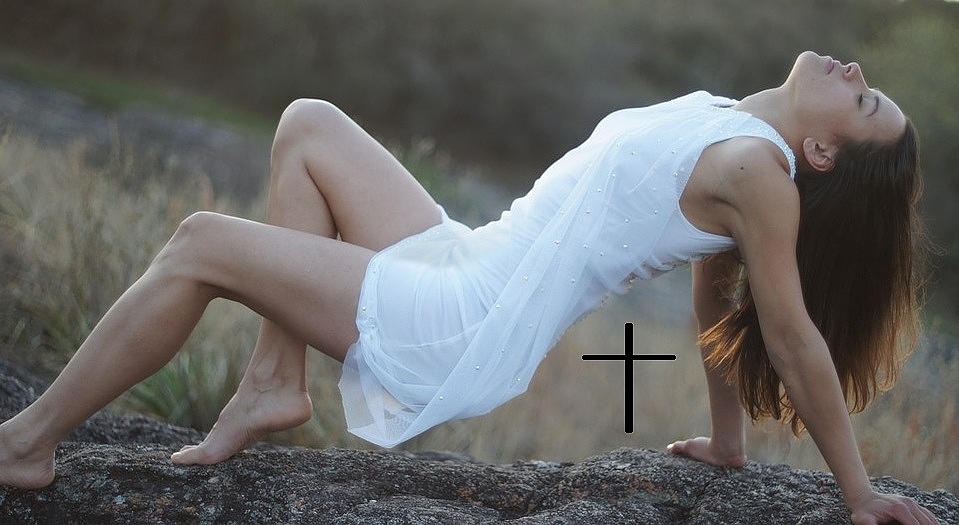 In my last article, we examined (all too briefly) Aleister Crowley’s reconciliation of the symbolisms of Christ and Satan through his adopted title of TO MEGA THERION. This work, however, was only one component of Crowley’s much larger quest to use the terms of Christianity itself to overcome the dualisms of Christian thought.

Thelemic writings are filled with gods from other pantheons whose subtle interrelations annihilate polarities. From the ancient Egyptian religion, which provides so much of Thelemic imagery, Crowley inherited the dyad of Horus and Osiris, whom the Egyptians sometimes viewed separately as father and son, and sometimes as aspects of one another—the same god at different points of his mythic cycle. Crowley used this pairing frequently to symbolize the duality of immanence and transcendence and the ultimate non-difference between the two. By pairing Horus at other times with his twin, the Ptolemaic god Harpocrates, Crowley expanded the symbolism to transcend activity and passivity, as well.

Even more fundamental for Crowley, perhaps because it represented the opposition which the modern West finds most difficult to reconcile, was the Egyptian dyad of the divine feminine, in which Isis, the goddess of birth, rebirth, and magick, was sister to Nephthys, a goddess of death, trailing wrappings and decaying flesh. In Egyptian thought, these two were united by their myths, as when Nephthys disguised herself as Isis in order to sleep with her brother-in-law, Osiris. Later Ptolemaic traditions put them in further creative tensions, such as the Paracelsan ascription of them to the two halves of the alchemical cycle of nitre. Together, they represented the wholeness of creation and destruction, each begotten of and begetting the other, each united in passion with the ultimate reality that transcends immanence and transcendence, activity and passivity.

Within Christian symbolism, Crowley found the counterparts of Isis and Nephthys in the Book of Revelation (his personal favorite), identifying them with the Woman of the Apocalypse (12:1-17) and the Whore of Babylon (17:1-18). This is where Crowley’s facility with Christian imagery shone brightest, as he repurposed a figure of ultimate disgust and evil into the central goddess of Thelemite devotion.

In Revelation, the Whore of Babylon carries “a golden cup in her hand full of abominations and filthiness of her fornication” (17:4), and also that she is “drunken with the blood of the saints, and with the blood of the martyrs of Jesus” (17:6). In its original context, this imagery harkened back to the Old Testament metaphor of Israel as the Lord’s adulterous wife, selling herself cheaply to the nations of the earth, and also referenced the Roman persecution. Crowley, however, identifies the cup held by the Whore of Babylon as the Holy Grail, into which the saints have bled themselves in releasing their attachments to the ego. Whoredom was, for Crowley, the ultimate symbol of this self-emptying, which he took to be the relinquishing of the limited self for the sake of union with the cosmos—from his perspective, a kind of spiritual promiscuity. Here, the “martyrs of Jesus” are those who have lost their lives to find them (Matthew 6:25; 10:39; 16:25; Mark 8:35; Luke 9:24), and in doing so have become non-different from all that is. This simple insight, followed to its natural conclusions, reveals the Whore as the paragon of Christian virtues. In the 12th Aethyr of The Vision and the Voice, Crowley writes:

This is the Mystery of Babylon, the Mother of Abominations, and this is the mystery of her adulteries, for she hath yielded up herself to everything that liveth, and hath become a partaker in its mystery. And because she hath made her self the servant of each, therefore is she become the mistress of all. Not as yet canst thou comprehend her glory. Beautiful art thou, O Babylon, and desirable, for thou hast given thyself to everything that liveth, and thy weakness hath subdued their strength.

The Whore, in this rendition, becomes the ultimate model of one's surrender to become the vessel of another's will, representing in Thelemic terms, surrender to one's own True Will. As is often the case in Crowley’s work, we are led to perceive the utter naturalness of something, that before, would have been utterly inconceivable—in this case, that the Whore of Babylon is fundamentally identical with the Virgin Mary.

This is subtly implied by Revelation’s juxtaposition of the Whore with the Woman of the Apocalypse, whom the Church traditionally identified with Mary. It is elaborated in the complex network of mythological correspondences that Crowley weaves with Egyptian figures, given the transfer of so many ancient symbols of Isis to Mary. It is in his presentation of the Christian virtues of the Whore, however, that Crowley moves beyond literary pedantries and makes the connection a cosmic reality, for Mary’s supreme act is her fiat (Luke 1:38)—her willingness to render her body completely to a stranger, yielding her own identity to become the vessel of another. The Annunciation occurred in the Temple to which Mary’s mother, St. Anne, had promised her before she was born, and Crowley accordingly presented the Virgin’s miracle as an act of sacred prostitution, in order to reclaim all that he perceived Christianity as repressing—sex, the body, the feminine—as inseparably vital to the acts of creation and salvation. 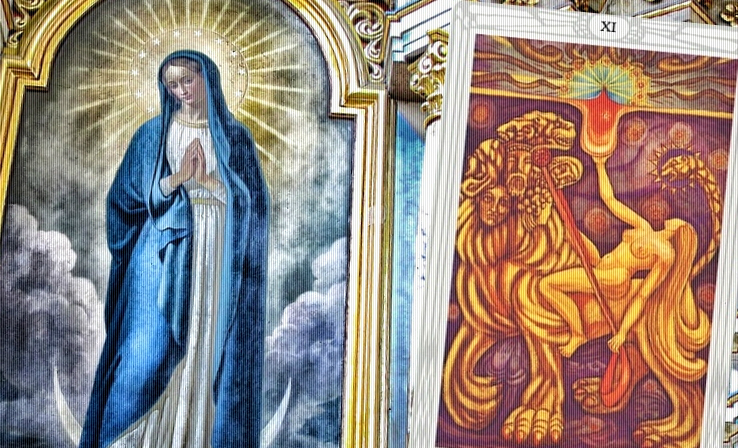 For him, the act of bleeding ourselves out into the Grail is also, symbolically, an act of impregnating the womb of the Whore of Babylon with ourselves. If the aim of Christianity is, as the great Christian mystics taught, to become wholly united in spirit with Jesus as the Christ—if it is truly intended that, as Paul suggested, we are to be members of one body with Him (1 Corinthians 12:12-27; Romans 12:5)—then, Crowley suggests, we can be born again through the Whore even as He was through the Virgin—our egoic destruction can truly be the counterpart of His universal conception. Like the light-bringing of Lucifer and the resplendent light of Christ (8th paragraph via link), immersion in the baptismal waters and bleeding into the Whore’s cup are, at last, one and the same.

Such inspired blasphemies as these were, for Crowley, the only means to avoid what seemed to him a far greater sacrilege—the suggestion that sensuality, both physical and spiritual, is something unworthy of a saint, or that sainthood is something above the station of a whore.

Related Reading on our Site:
To Mega Therion
Aleister Crowley, Some Things you Might Want to Know
Crowley :: The Legend and the Lies, Myths Exposed
On Crowley, and the Writing of the Liber AL vel Legis
"TO META OPHION" Meaning