The other night, just before sleep I experienced a dreamlike vision. As with most of the visions I've had, there were a lot of shapes that looked like sacred geometry. The main difference this time, was that the vision was entirely black and white. I was aware enough to commit to analyzing what I was being shown. As I knew it to be a message, it was given my absolute focus. Well within a single minute I had figured out the overall concept being shared with me.


The Story of My Vision, My Message, Continued...


The swirling and beautiful (yet unidentifiable) shapes were telling me that even though in my life right now I'm dealing with a trying circumstance, I need to be aware that nothing happens without reason. Not only that but one event invariably leads to another, and even when it appears that things are consistently going badly, to hold faith as well as the knowing that it's a phase that will lead on to better; and furthermore, that absolutely everything within this universe is connected. To experience really good one must have known and worked through some significant bad, would be but a small part of comprehending the message I was presented with in its entirety.

Every thought, every emotion, every rock, tree, plant, planet and human being - everything is integrated within the spiritual energy grid of this universe. Thus when feeling alone, I'm cautioned to understand that it's false of an impression, that no one is ever alone - unless they unwittingly impose that upon themselves. 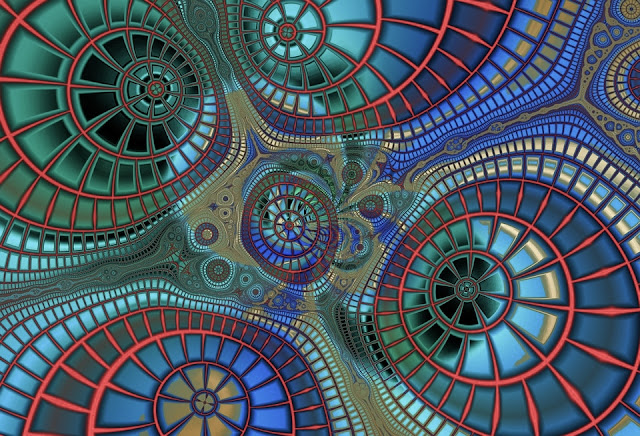 No sooner had I realized that the message was to offer me solace by way of knowledge of oneness (in a different way than how I was previously aware of it), than the vision immediately added in rich, brilliantly intense coloring and changed form somewhat. The way the vision adjusted itself served to confirm my interpretation.

There was so much to be gleaned from this extremely simple vision, which surprised me somewhat. I had grown to take the theory of oneness (a large factor of the message) for granted since my discovering it a few years back. With this particular vision, for the first time I really tuned in to see what it was telling me. Now I have a new understanding and awareness of oneness, as well as of how things fit together, and how us spiritual beings living as humans have feelings that can stunt us at times.

Since this vision, I feel that within the knowing of the great united oneness of being, there is a message - as everything that happens is connected to all other things within the universe, nothing "just happens", and we each hold our own key; we are virtually never without opportunity to create change. We need only to discover the source of our obstacle, and the resolution lies in acting upon that discovery, the universe apparently operates like a massive geared machine, but of course it's far more complex than any earthly machine we could imagine, but as well not needing so much effort to work once one knows how to approach it - and it's up to us to develop the awareness of how. One quickly learns that intent is one of our most powerful tools.

The theory of oneness brings to mind a vision of the universe as being a large disc-like shape (in all likelihood the universe is shapeless, however my human brain needs to imagine its form); the universe is the oneness, we are each a factor of it. Some positive and some negative energy is required to achieve balance. Everyone and everything gets a share, the rest is dispersed within the universe; but all of it is in constant motion. I see the energies moving around from spot to spot. Sometimes it's my turn to get the good ones, sometimes not.

My perception of how oneness applies to my situation is that there can only be a certain amount of energy present for its fluid motion within the universe (the down phase in my live, I mean); and that all energies are in constant motion. To sum up what I mean, one could simply say, that "this too shall pass", no matter what one faces for that moment in time. But too, it comes to mind as I write - who says that I'm confined to any specific phase of events for a certain moment in time - when one considers the grandness of the oneness, to think that one is confined only to their specific table of events is absolutely preposterous; yet as humans we are prone or conditioned to believe it as fact.

And when negativity hangs around, it's my duty to figure out what that's telling me, and to begin nudging energies around in order to create a new type of motion (change), and thereby a solution. The whole vision, the entire message, is telling me that when I have committed to learning the lessons which will expose themselves to me during this period of time and hereafter, I will be rewarded with better. It didn't evade me either, that to do this successfully I will need to work through my current difficulties by opening my heart, mind and spirit to doing the most effective job I can.

This whole idea is very important to me now as I really want to pave a newer and brighter path into my future. I suppose the underlying premise is that when we commit to deciphering what our faults are which bring us the tougher messages in life, we can do what is necessary to eliminate them, and also prevent similar from happening again. I wanted to share this experience with you to show some that some important life messages can be gleaned through visions (as well as dreams).

Another reason to share this story is to show that even the dreams and visions we have with no discernible shapes or figures, may be and likely are telling us something. All we need to do is focus, and listen to our inner voice and/or feelings to determine the message we are being given. And yet another reason to share this, takes us back to the spiritual message of oneness that we are so consistently exposed to nowadays. If you feel that the concept of "the oneness of being" of all within this universe is a fallacy, pay attention to all that happens within your own life. I believe that the truth will be sure to reveal itself. Granted too, that the very fact you are here and reading this, tells me there is little chance you are one of the many that believe that oneness is a figment of New Age imagination running amok...