The Serpent Gate: To Meta Ophion 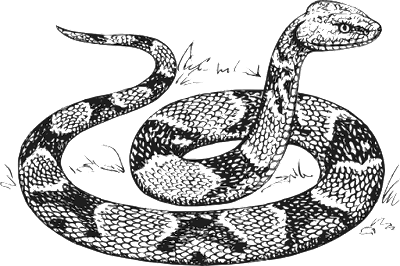 Looking to Define the Term "To Meta Ohpion" (Ophion), Thoth Ace of Disks


As this author has had occasion to observe before, with the Empress, there is no detail of the Thoth Tarot too small to deserve the closest analysis. Such is the case, certainly, with the Ace of Disks, and yet the eyes of students often pass too quickly over its seemingly abstract design to appreciate its many layers.

For one thing, the layers are not an abstract design. The brown oval dominating the vertical axis of the card is, on close inspection, the cross-section of a tree, layered with rings and ringed with bark. It represents longevity and maturation. In each of the corners of the card, the foliage of the tree takes the attitude of sheltering wings, with great clusters of seeds or acorns sprouting from the joints. These represent fertility. The same image, smaller and translucent, lies perpendicular across the card, representing the inner, spiritual dimension of the tree. At the center of both is a circle. Examined closely, this circle is a plant cell, with the rigid cell wall enclosing new cellular division within. The newly dividing cells ring two overlaid pentangles, representing the atom in its original, Greek conception—the smallest, indivisible unit of matter/energy from which all other things proceed. 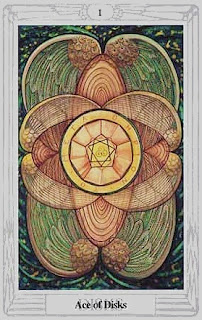 Then one comes to the inscription. Inside the wall of the cell runs a curious phrase: TO META OHPION, for the rest of this post changed to the more common spelling OPHION. The words are Classical Greek, but of a slightly ungrammatical kind, leaving the meaning ambiguous. Scholars of Crowley’s work often translate the phrase as something like, “After the nature of the snake,” but Crowley himself seemed to treat it as a single unit, which he identified with the meanings “Initiation,” or “Entrance.” The core reference of the phrase is the serpent Ophion of Greek mythology, who was held to have ruled the world in the beginning alongside the goddess Eurynome, before being overthrown by Chronos, Rhea, and the Titans (who were later, in their turn, overthrown by Zeus and the Olympians).

The role of Ophion in ancient thought is somewhat unclear, since we possess only fragments of the works that referred to him, but his role in modern thought is easier to understand. He became the centerpiece of the reconstructed “Pelasgian creation myth” popularized by the poet-scholar Robert Graves in his book, The Greek Myths. In Graves’ account, Ophion arose from the dance of Eurynome upon the waves of primordial uncreation. The two then mated, and Eurynome laid an egg, around which Ophion coiled himself until it hatched into the world. The two dwelt together long ages on Mt. Olympus until Ophion, in his pride, began to claim that he had created the world alone, whereupon Eurynome kicked out his teeth and banished him to the underworld.

For Crowley, Ophion could thus be a symbol of the beginning, and also a warning. The Ace of Disks stands at the spiritual root of a suit that deals extensively with material wealth. The two kinds of riches—spiritual and material—have often been opposed in the world’s religious and philosophical thought, but Crowley emphasized to his students that there was nothing inherently unspiritual about material wealth, so long as one maintained the proper attitude. For him, spiritual “poverty” was about recognizing the fact that one can, in truth, own nothing. Once this is realized, one can make use of anything. Ophion’s story, by way of negative example, reinforced this basic concept—one can avail oneself of the whole world, so long as one does not try to lay claim to it.

The figure of the serpent was perfect for placement at the root of the suit of Disks in another sense as well. Ophion’s story cannot help but be compared with Lucifer’s, who is traditionally identified with the serpent in Eden. In that story, the serpent is responsible for the movement of humankind into knowledge (which, with typical Biblical ambiguity, has both intellectual and sexual connotations), and thus sets in motion the whole evolution of the manifest world of time, life, and death—a movement that is necessary, in both Jewish and Mormon thought, for the completion of Creation and the perfection of man. Crowley was certainly aware of the parallels between this account and the yogic doctrine of the kundalini energy, associated with both the serpent and the Goddess, which the yogi/ni aims to raise through the seven chakras to attain full realization—a doctrine remarkably parallel to Moses’ saving of the people from the serpents of fire in Sinai by elevating a brass serpent upon a pole (Numbers 21:8). In all of these cases, the world of time and growth (figured in the rings of the tree) is the field upon which men and women seek integration and wholeness (figured in the crossover of the material and spiritual dimensions of the tree), and the serpent is the one who stands at its primordial center.

For Crowley, the serpent stood at its end as well. The Two of Disks makes the serpent visible upon the card in the form of the ouroboros—the serpent eating its own tail, which, since Classical times, has represented the cyclicality of time and world without end. Additionally, TO META OPHION reappears in Crowley’s writings as the magickal phrase associated with the card Lust (XI). There, the serpent is engendered by the Goddess once again when She, in the form of Lady Babalon riding atop the Great Beast (which is one of the forms of Lucifer in the Book of Revelation), upholds a cup shining with the All in All, which scatters sephirotic rays described by Crowley as “serpents sent forth in every direction to destroy and recreate the world” (Book of Thoth). Given the close connection between these cards, it seems only fitting that Crowley—who identified himself with the Great Beast—drew the Ace of Disks when inquiring as to his own nature.

It is into this endless cycle of destruction and recreation—like the serpent shedding its skin or the tree its leaves—that we are invited by the beguiling words TO META OPHION. They ring out from the hearts of atoms, calling us to put roots into the earth and to return to our root chakras. They give us the courage that we need, in the face of the absurdity of life, to make use of all that is at our disposal without succumbing to the temptation to possess. When we answer their call, we find ourselves at the entrance of new layers of existence, each in its turn discovered, cultivated, integrated, brought to external expression, and then transcended, just like the rings of a tree. Every layer brings us closer to death, but also to the discovery of our True Will, which is the only true life.


Related Reading on Our Site:
To Mega Therion
Aleister Crowley, Some Things you Might Want to Know
Crowley :: The Legend and the Lies, Myths Exposed
On Crowley, and the Writing of the Liber AL vel Legis
The Virgin and the Whore (the faces of the Nondual Feminine in Thelema)