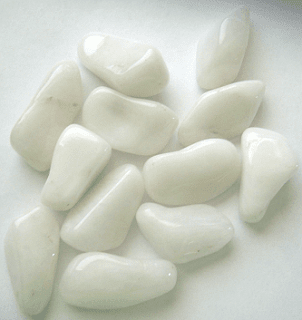 Snow quartz is a milky white macrocrystalline quartz, that may exhibit diasterism--which is asterism produced within the stone by a light shining through it (rather than on it, which is epiasterism). It's a rather common mineral that can be helpful in assisting us to reach deeper meditative states. Its yin energies offset excessive yang in order to provide balance; as a matter of fact, this stone possesses the same properties as clear quartz, but presents them in a gentler way.

Snow quartz deposits can be found across the globe, but are most commonly found in the United States, Mexico, and Brazil.

The white, sometimes icy-looking appearance of snow quartz provides clue to it being the embodiment of innocence and clarity. It can help the wearer to see the world through less jaded eyes and will allow the wonders of the universe to become more readily visible to them. This stone can be used to activate the crown chakra, and can assist one in connecting with their higher self or with spirit guides. Wearing it or having it in your immediate environment is also believed to dispel negative thoughts and emotions and allow a more positive perspective to come in.

Like any other quartz, snow quartz is very open to programming and tends to hold on to its program for a long time; thus it’s beneficial to use for any metaphysical purpose. For Tarot readers it can prove valuable, as it heightens intuition and facilitates interpreting card messages. As it provides a mental setting of sharpness and clarity, it becomes easier to learn and to retain what was learnt. Additionally this is a stone of good luck, and it can help you cast aside burdens and the feeling of being bound by limitations.

In magick it is ideal for connecting with female deities and lunar deities, as well as deities relative the Qabalistic sphere of Kether, and also for use in rites of purification.


Disclaimer: You should consult your health and/or mental health professional before using any alternative healing methods. This article does not suggest otherwise.

Snow quartz especially resonates with the pituitary and pineal glands, which regulate the body’s hormonal function; it can therefore have an impact on both physical and mental well-being. This crystal is considered useful for enhancing the immune system, and in ridding the body of infections and other diseases.

This delicate white stone can be worn to protect and heal the body from the effects of radiation, including the pain of sunburned skin. Due to the fact that it is capable of neutralizing the onslaught of overwhelming thoughts and feelings that often cloud the mind’s ability to operate rationally, healers have commonly come to rely on snow quartz to help with mental and emotional issues. As well it supports the health of our teeth, bones and bone marrow, and can soothe common issues for breastfeeding mothers and women dealing with early onset menopause.