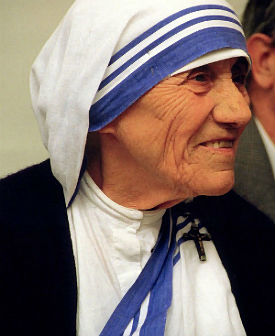 Mother Teresa, Violence as a God, and Animal Rights Activism

Within this post, my initial intent was to discuss more than one issue, how many I didn't know up front... that's me, a free spirit, going where life's energies may lead. Basically I was voicing my thoughts as the piece evolved...


The first thing on my mind:

Violence as a God

Movies nowadays - I literally can't watch them anymore. So much killing, blood, gore, violence, disrespect and screaming; and they promote the value of gratuitous acts and sensual appeal above all other human functions and attributes. I want to do something, even just the little that I can do as one person within the world to create change and improvement. In the distant past, censorship at times took place, and that wasn't the answer. But this is the opposite. It's almost as if the movie industry is catering to a certain set of tastes.

Are the individuals that enjoy watching people degraded and torn apart in their movies the bigger buyers? Or is it more fun to make such films? There appears to be a need, for those of us that care, to do whatever we can to stop the gross marketing of these disgusting movies, especially to our younger generations. And I feel that buyers need to develop an awareness of the fact that they should not think it's okay to obtain entertainment value from watching harm and degradation befall people.

The term "violence as a god" doesn't go to say that people directly worship violence... but as abuse and such is so damaging within our society, you know, having it sit so densely within mainstream entertainment, is in my eyes exactly the same as worshiping it outrightly. Violence should not be our God, nor should it be that of our children and theirs. And it isn't just movies either, YouTube is full of such stuff - people being harmed, not just physically, but mentally also. YouTube has limits, so it's low level stuff, but it's still there; and it's there because people are enjoying it.

And in line with the same overall topic, ads nowadays have young ladies near naked, and packaged like meat as well... something needs to change. No one can say that these things don't promote the breakdown of values; they do, and they also corrupt us as spiritual beings.

We must get real at some point in order to create improvements where needed.

I feel the presence of Mother Teresa now - seriously, her energy is within my pineal area. Her presence is to urge us, she makes no demands. She acknowledges that it isn't everyone's calling to dedicate their respective lives to the service of others. She isn't comparing her actions to those of others, neither then (during her lifetime) nor now (this seems to mean that she's not at all suggesting for us to strive to be like her). She doesn't see what she did as being heroic or grand, actually just the opposite. She did her work as it was a necessary thing for her to do, and nothing more than that. *I'd like to point out that nothing about her message was verbalized, I read her energy as I felt it.

I get that she came to me as I hold a great regard for what she did, so I can put her energies into words on her behalf, knowing how she would want to be presented given how humble she was. Her desire is for more people to take action, to provide, to offer aid, and to love those who are without. Know that it's okay to feel the pain, to feel sympathy; but feeling for them is simply not enough. Anyone who feels something when they see people suffering in any way, maybe someone isn't loved enough, or has no resources or whatever, know that it begins with you, the road to somewhere better starts with you.

Thus concludes my mini channeling from Mother Teresa... and yes, that's all she said.

Many of us are animal activists at heart. Lately I heard a relative speak of his pain when seeing a dog abused; he related to me his feelings of helplessness in not being able to act. His form of activism was to acknowledge the pain. I was hurt to know that he did nothing, it was disturbing to me. But I too made a similar mistake, it wasn't that long ago...

Someone our family knows was having major personal issues, and as a result his animals were being neglected. One of his horses looked very unwell and I was telling a relative that I was going to report the problem to save the horse. I was told not to, as it would be obvious, given that so few knew of the horse and its condition, that it would have to be someone from within our family that made the report. One family member told me that they would take the matter to the vet instead - that would have done the trick, as our local vet is very much an animal activist. But later on I found out that I had been duped; no action was taken, and that horse died. I now realize that I should have seen it through; had it been a human I would have.

That I didn't follow through wasn't borne out of prejudice, I care about animals deeply and know that they can't fend for themselves. But the followup would have been difficult to arrange; I personally have no interactions with the person this incident concerned, and I didn't see the horse after the initial period referred to. One thing I can honestly say is that nothing similar will ever happen again through my oversight. As a matter of fact a short while later, a few more of the same person's horses were being neglected and the matter was addressed swiftly, and yes I as well as another family member were responsible for the horses being saved.

Initially I made a big mistake, but to move on in a better way I forgave myself and let it go. Now, to do my part in a more effective way I urge others to join me in vowing to never turn a blind eye to animal cruelty and neglect, even under circumstances that make it awkward or difficult to intervene.

Don't judge me for what this blog contains, I know the first part is going to hit more than a nerve or two; my intent is to speak my truth, nothing more. Thank you for hearing me out today. Feel free to comment.

PS. At the time this blog post was written I had a lot of respect for Mother Teresa. Not so much today, as I feel that the way she treated the people who came to her seeking help, cruel.