Yogic Breathing as an Esoteric Exercise 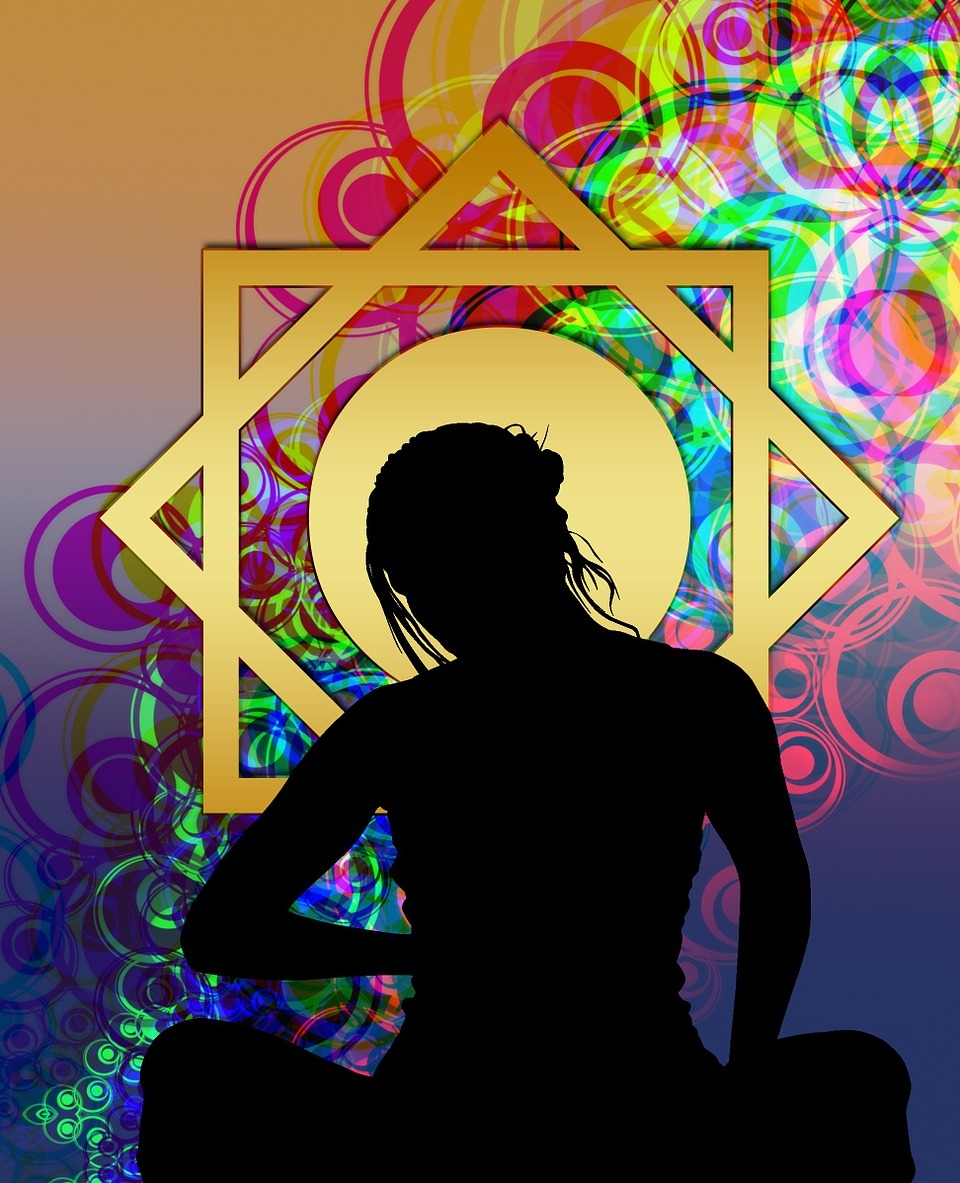 
The yogic art of breathing, known in Sanskrit as pranayama, deals with more than simply the control of breath; it has to do with the control and balancing of the flow of one's spiritual life force—prana. The esoteric connection between breath/wind and animating spirit in the same word is common to many cultures, as witnessed by the Greek pneuma and the Hebrew ruach, but it has rarely been so thoroughly cultivated as a practical discipline as it has in India.
#AmazonADlink: Asana Pranyama Mudra Bandha/2008 Fourth Revised Edition, by Swami Satyananda Saraswati

It is interesting to note the parallels between the four types of pranayama breathing and the four conditions of the Self (atman) described in the Mandukya Upanishad. This short text of the first or second century AD distinguishes the waking life directed toward the outside world, the dreaming life of the consciousness turned in upon itself, the sleeping life devoid of thoughts and dreams, and lastly the pure state of absolute consciousness, at one with the universal reality of brahman, which incorporates and transcends the first three conditions. 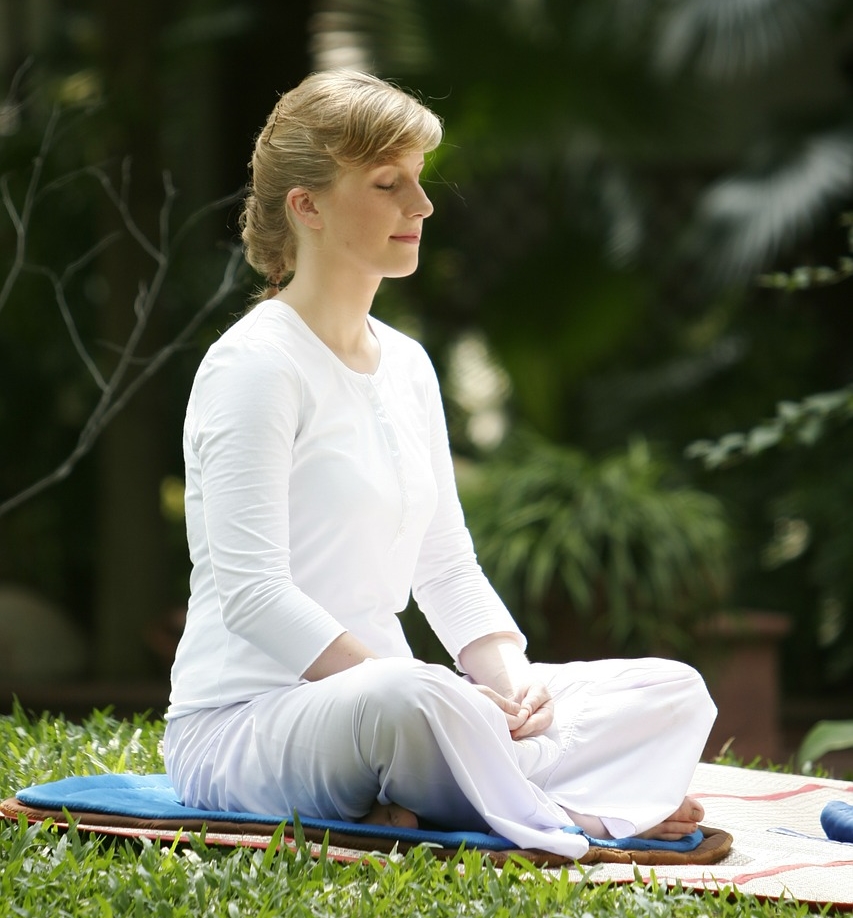 Like the waking life, high breathing is, by itself, superficial and fails to fully utilize the resources of the human being. Like the dreaming life, low breathing is deeper and richer, but associated with laziness and a degradation of posture, represented in this analogy by escapism and withdrawal from the outside world. Like the sleeping life, middle breathing hangs in a precarious balance between the two. Like absolute consciousness, complete breathing incorporates all of the previous stages but goes beyond them to achieve a result which is more than the sum of its parts, and which fully integrates the human being.

The Mandukya Upanishad analogizes the conditions of the Self to the sacred syllable aum, likening the first three conditions to the three letters considered separately, and the fourth condition to the letters taken together to form the fundamental vibration of the cosmos. We might just as easily apply this analogy to the four types of breathing.

This idea of three stages which build to a fourth constituting unity, is not unique to India. Section 42 of the Tao Te Ching states, “The Tao produced One; One produced Two; Two produced Three; Three produced All things.” On the other side of the world, in Greece during the fifth and fourth centuries BC, Pythagoras and his disciples elaborated their notion of the tetractys—a pyramid of numbers represented by dots, with one dot on the top, two on the second row, three on the third, and four on the fourth. The addition of the fourth row made the total number ten, which the Pythagoreans believed to be a higher dimension of unity—a kind of cosmic One.

From the tetractys, Maria Prophetissa, a first century woman who was instrumental in the creation of alchemy, derived her famous axiom 'From the first comes the second, and from the second the third, and from the third comes the fourth as the One', which has been a proverb of European esotericists for centuries. Among them Jakob Boehme, a seventeenth century German mystic, used the axiom to interpret the tetragrammaton—the four Hebrew letters which make up the name of God—noting how the first three letters find their completion in the fourth (which is yod, a repetition of the divine name's first letter) to spell out the name of the ultimate cosmic Unity.

In all of these thinkers we find ever new phrasings of the same spiritual truth that yoga traces upon the very breath. The exercises of pranayama, or yogic breathing, far from being simply about breath control, are thus revealed as the microcosmic gateway to one of mankind's most enduring and universal spiritual teachings—the emergence of ultimate unity from the apparent multiplicity of the universe.

Posted by Metaphysicality Inc at 3:04:00 PM No comments:

Email ThisBlogThis!Share to TwitterShare to FacebookShare to Pinterest
Labels: Spiritual

The coloring of blue aventurine is due to dumortierite and/or crocidolite inclusions within its structure. An effective tool for battling addictions of any kind, it helps us take charge, and to take the degree of responsibility necessary to create change. It also helps those who are oversensitive or are feeling spaced out. With this in our arsenal we connect more with our inner truth, and we enhance our communication skills and the ability to speak out. It is associated with the 3rd eye and throat chakras.

Disclaimer: You should consult your health and/or mental health professional before using any alternative healing methods. This article does not suggest otherwise.

In general, and especially when used in meditation, blue aventurine heightens psychic awareness. It removes stale energies, which opens one up to growing in person and in spirit. As well it improves communication skills; which is integral, because through speaking out as required, a person is operating more as their authentic self. This stone is one that draws energies of abundance and prosperity, and it heightens the chance of a positive outcome in any situation, gambling included. Furthermore it protects us against negative energies and psychic vampirism.

Blue aventurine creates balance and healing within the mind, and encourages us to look at the world with an optimistic perspective. It helps us to act with willpower and self discipline, and with it emotions are balanced by reason and logic. It is of benefit to have on hand when expecting a negative situation to unfold to improve the overall energy. Blue aventurine is appropriate to use in any cleansing and healing process.

When used in the home, it inspires a feeling of peace and calmness. It helps to reduce anger, and helps you to connect with and receive prime insight from your higher self. Blue aventurine also enhances leadership qualities, simplifies dream interpretation; and nervous children and nervous animals can both benefit from its energies.

Blue aventurine targets the ears and hearing, speech, throat issues, the vocal cords, the mouth and teeth, the esophagus, the parathyroid glands, and the higher area of the lungs. As well it addresses the nervous system, the lower brain, glaucoma, the nose, the pituitary gland, headaches, forgetfulness, and scalp problems.

Posted by Metaphysicality Inc at 9:37:00 PM No comments:

The Tarot of Vampyres in Review 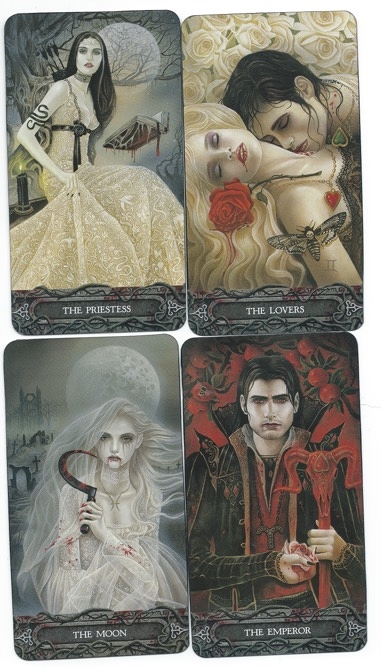 The Tarot of Vampyres (Ian Daniels)


Vampire-themed Tarot decks have been cropping up like weeds for the past decade or so. It would be easy to attribute that to the popularity of recent works of fiction such as Vampire Chronicles, Twilight, or True Blood, but I think the allure and the terror of the bloodsucker myth goes much, much further back—to times before Christopher Lee, Bela Lugosi, Bram Stoker, and John Polidori. British painter and illustrator Ian Daniels offers some interesting insights about this in Phantasmagoria, the companion book to his Tarot of Vampyres.

Most vampire decks are blessed with good to outstanding art, no matter what their other merits are, and the Tarot of Vampyres is no exception; in fact, it is one of the more outstanding ones—perhaps my favorite in that respect. It is a sumptuous, sensuous nightmare of a deck, where pale model-like undead beings of both sexes (none of whom seem older than twenty-five) writhe in tortured poses and Celtic jewelry under ominous skies. There is something lurid and overripe about the sheer fulsomeness of such decadence (as if it were the impossible love child of H.P. Lovecraft and Aubrey Beardsley), to the point that, after buying it on impulse, I found it frankly, unreadable. 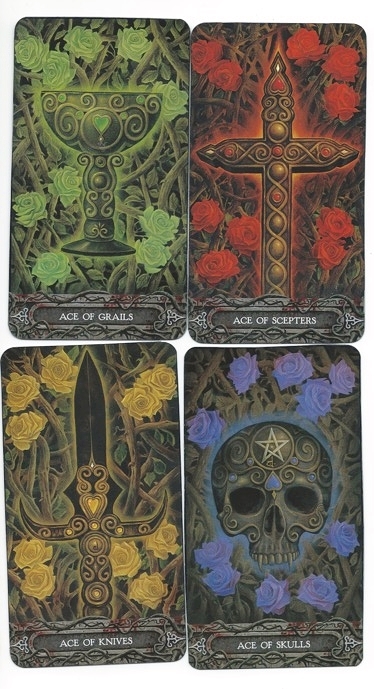 Paradoxically enough, it was the book that rekindled my interest. At over three hundred pages, Phantasmagoria is not your regular LWB or companion booklet, but a full-fledged book, well-written and surprisingly meaty. One can find in its pages everything and the kitchen sink, from Kabbalah to astrology to Jungian psychology; and yet there is nothing haphazard about such accumulation. Daniels is no mere dabbler; he has obviously done his homework, and the result is an excellent tome, good for both pleasurable reading and useful reference. I would go as far as to say that, for a person new to Tarot (especially if that person likes all things Gothic, of course), this could be a good first deck and book.
#AmazonADlink: The Tarot of Vampyres, by Ian Daniels

So pleased I was with the book, that I decided to give the cards another chance. And, boy, am I glad I did! Thanks to the book, I was able to get pass the encroaching vines and curlicues and the overt sexiness of all those pretty young things (coiffed, bejeweled and tattooed within an inch of their lives) and could appreciate its veritable cornucopia of detail, more rewarding now that I could see that none of it was gratuitous. Moreover, the sheer splendor of the cards can entrance you and pull you into a different dimension. One can easily get lost among the folds of the Priestess’s luminous lace dress, or in the soulful, bottomless eyes of the Emperor. 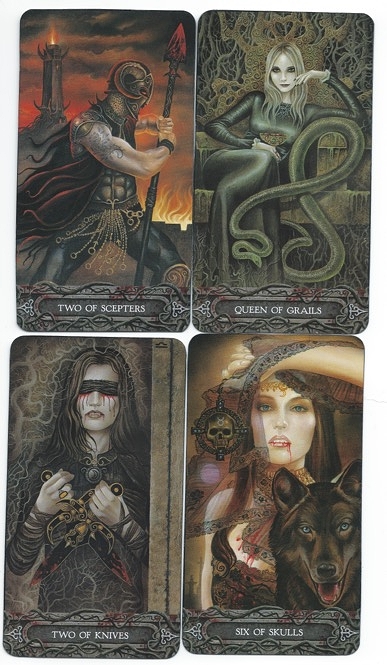 The suits of the Tarot of Vampyres have kept their Golden Dawn correspondences, and have been renamed as Scepters (Wands, fire), Grails (Cups, water), Knifes (Swords, air) and Skulls (Pentacles, earth). The court cards are named after the Thoth’s: Lord, Queen, Prince and Daughter. Justice is VIII, Strength is XI.

The Tarot of Vampyres is perhaps not for everyone; but its merits, I think, are undeniable. And, even if the cards are not to your taste, Daniels' book will prove itself worth your time.

It is published by Llewellyn; the cardstock is lightweight and shuffles easily. Unfortunately the thin white box that holds the cards within the set isn't good for carrying them, it broke down quickly.


Copyrights to deck images belong to the holder, more often than not that's the publisher. Images may not be reproduced elsewhere without written permission from site owner.

Posted by Metaphysicality Inc at 9:39:00 PM No comments: