The Five of Swords, RWS and Thoth Tarot Card Meaning 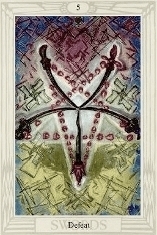 Occult Name: The Lord of Defeat
Five of Swords in timing: Five weeks; or from January 20th - 29th
Qabalah: Geburah in Yetzirah
Astrological: Venus in Aquarius
Reading with Playing Cards: Equivalent to the Five of Spades

Above all else, the Five of Swords alludes to being unnecessarily harsh or heavy handed in interactions; the RWS image sums up the sentiment quite effectively. In the foreground, the man has all of the swords, the others have none. It would serve the others to have at least one each, but no. It's a scene of annihilation and degradation. The bleakness of this card suggests that such behavior has repercussions. Will those hurt, plan a payback? Will they remember and cause further repercussion, at each opportunity? Will it have been worth it in the long run, to have lost them as allies? Will the two bring others to their side in future, and in that introduce deeper hardship and or conflict? In the end the so called victor stands alone; there is no true win.


The image of the Five of Swords, Thoth card, shows the swords in an inverse pentagram formation. Four swords are straining, and the lower one, the fifth, is missing a large piece; this is mental activity run amok. The inverse pentagram is used to symbolize evil on this card, despite the fact that Crowley did not see any symbol as accurate in doing that. The lowest point of the pentagram represents spirit; it has been beaten down and is now the weakest sword. Gone is the rose of the Rosy Cross, so prominent in the Four (symbolic of, for just a few things, social peace and harmony, expanding awareness, silence, and man harmonizing his base nature with his spiritual nature); the swords have dismantled it and turned it upside down--its petals worn like a perverse trophy.

The environment is rife with negativity here in Mars (Geburah) in Yetzirah; it breeds ugliness, such as malintent, fear, loss, poverty, jealousy, greed, dishonor, etc. Amicable Venus and Aquarius, cannot be true to their nature in this setting.

The Five of Swords Dignified or Upright

The Five of Swords Ill Dignified or Reversed