The Four of Disks or Pentacles, RWS/Thoth Tarot Card Meaning 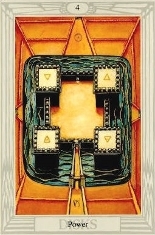 Occult Name: The Lord of Earthly Power
Four of Disks or Pentacles in timing: Four years; or from January 10th - 19th
Kabbalah: Chesed in Assiah
Reading with Playing Cards: Equivalent to the Four of Diamonds

The ideal of this card, both RWS and Thoth, is to maintain what one has but to avoid getting hung up on worldly pursuits, no matter what kind--achievements, monetary, love, and so on.

The Four of Disks Meaning, Thoth

On the good side, the Four of Disks, Thoth card's imagery suggests that the fortress one has built, provides solidity and strength of foundation--a place to be fruitful from. Imagine, inside that fortress there's rooms to do whatever one needs from, in order to achieve. There's a downside as well; that path leading out is quite narrow, which suggests that when such a heavy focus is placed on material objectives, one restricts themselves. The pretty little rooms that would serve one so well in business and other areas of life, have instead become turrets to defend.

The fortress is symbolic of power, and also of being prepared for war. Thus balance is a key word here--not just in pursuing worldly desires, but also in the application of power and authority.

A subtler meaning of this card, offers that if one places their entire focus over here, what are they missing out on over there.

The RWS Take on the Four of Pentacles

The Four of Pentacles man looks somewhat foolish as he's clinging so tightly on to what he has. This card, some say, comes across as being darker in delivery than the Thoth image does, and that it is therefore more "negative." I question that, they both offer a strong caution.

The figure on the RWS card has gained much, but what has he lost? He is distanced from all and is apparently alone. Who or what has he forfeited in order to gain all of that money he clings to so dearly? It appears that in letting go, we are more likely to hang on to what we have.

The Four of Disks or Pentacles Dignified or Upright

The Four of Disks or Pentacles Ill Dignified or Reversed