The Three of Disks or Pentacles, RWS/Thoth Tarot Card Meaning 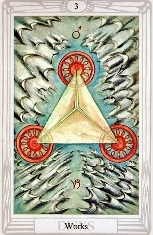 Occult Name: The Lord of Material Works
Three of Disks or Pentacles in timing: Three years; or from December 31st - January 9th Kabbalah: Binah in Assiah
Reading with Playing Cards: Equivalent to the Three of Diamonds

The Three of Disks (Pentacles) Meaning

The Three of Disks or Pentacles card, by both deck images shown (Thoth and RWS), is one of accomplishment. One of its main messages is, that you are journeying down the road to achievement, or that you have the necessary setting, skills, tools, and resources to do well, and that now's the time to get to work. You need to brainstorm how to make things work with fluidity in this setting; this may include applying the right persons to the right tasks, or enlightening people on the finer points of their tasks,  and setting priorities correctly.

The Three of Disks urges you to take pride in what you do, be it your career, an enterprise, or a relationship; nothing great happens without due effort on your part. It can also refer to a situation experiencing beneficial change; but effort is an underlying factor... nothing "just happens," even when it appears to have done just that.

In matters financial, it's a great card to see, as it speaks of a great potential for financial affluence.


The Three of Disks (Pentacles) Dignified or Upright


The Three of Disks (Pentacles) Ill Dignified or Reversed