The Three of Swords, RWS and Thoth Tarot Card Meaning 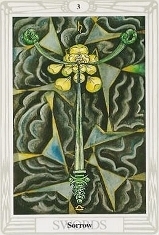 Occult Name: The Lord of Sorrow
Three of Swords in timing: Three weeks; or from October 3rd - 12th
Kabbalah: Binah in Yetzirah
Reading with Playing Cards: Equivalent to the Three of Spades

The Three of Swords, RWS and Thoth Meaning

The Three of Swords; with it we address one of the more obvious and clear definitions within the tarot. Many of the cards at times concern issues that cause us various levels of anxiety, stress, pain, and grief. But when those issues fall to become part and parcel of this card's definition, they have doubtlessly adopted a whole new aspect of gravity.

The pain referred to by this card, is often situational; its message hints at the way of evolution of interactions between people, no longer serves the querent. By way of gravity, the Three of Swords hints that this could have been avoided by employing solutions or moving away when signs first arose, and that the current situation is a natural progression of what came before. At other times, this card suggests that one's mental status is heavily coloring the perspective they have on life, and it's time to work on the root cause and heal it over.

The Three of Swords Dignified and Upright

The Three of Swords Ill Dignified and Reversed

Posted by Metaphysicality Inc at 10:28:00 PM No comments:

The Three of Wands, RWS and Thoth Tarot Card Meaning

Occult Name: The Lord of Established Strength
Three of Wands in timing: Three days; or from March 31st to April 10th
Qabalah: Binah in Atziluth
Astrological: Sun in Aries
Reading with Playing Cards: Equivalent to the Three of Clubs

The Three of Wands, RWS

The RWS Three of Wands, as expected, moves on to cover the next aspect of what arose in the two. In the ace, a raw energy presented, in the two that energy was manifested into the material plane and initial thought and planning were put into action. Now in the three, we are planning, looking at what could possibly arise as obstacles and are considering how best to avoid them, and so on and so forth. This period of preparation and analysis may include finding the most suitable environment, scouting out the best group of people to carry the project through, and perfecting strategy. The Three of Wands also refers to effective application of strength and will, and to good overall moral standing.

The Three of Wands, Thoth


The lotus wands depicted on the Thoth Three of Wands card, represent Leo's energies of creation, and also power, as their number is three. Three is powerful given its standing in Qabalah, as it represents the supernal triad. The orange coloration speaks of awakening, strength and endurance; also, the heat and energy of the sun, and thereby divinity and creation. Yellow alludes to wisdom, and again, the sun and creation. There are are sixteen flames; sixteen is a reflection of 61, which in gematria encompasses Nothing, as Ain, but also All, as House. Of the sixteen flames, ten are crimson (the color denoting passion and will), six are white (illumination, kindness, and spirituality). Furthermore, sixteen is 4 x 4, which when building structure, will provide a solid foundation.

Ten, the number of the red flames, is the number of perfection; as well it is a building block number, as all great numbers are founded upon it. The numeral six, of the white flames, again alludes to the sun and its harmonious energies.

This card has all the makings of manifestation, success, and fruition. Yet in and of itself it is not success, nor is it manifestation (it is both all and nothing!). In fact, it is as fertilization is to the process of having a child; in this way it contains success within it.


The Three of Wands Dignified or Upright

The Three of Wands Ill Dignified or Reversed

Posted by Metaphysicality Inc at 11:12:00 PM No comments: