The Two of Disks or Pentacles, RWS/Thoth Tarot Card Meaning 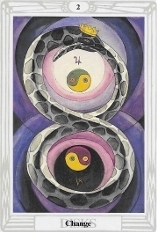 Occult Name: The Lord of Harmonious Change
Two of Disks or Pentacles in timing: Two years; or from December 22nd - 30th
Qabalah: Chokmah in Assiah
Astrological: Jupiter in Capricorn
Reading with Playing Cards: Equivalent to the Two of Diamonds

The Two of Disks or Pentacles Meaning

The RWS Two of Pentacles; the ideal of this card is rolling with changes, harmony and balance, and happiness. If the growth, renewal, and evolution that change brings is blocked, it goes without saying, the quality of one's life will be diminished accordingly. Ergo, this card suggests that a person's unwillingness to allow for change, will be at the core of an issue.

On the card a man is shown dancing. Dancing, but he does not look particularly happy; so he's doing the best he can under the circumstances. There are waves behind him, which speak of turbulence. The turbulence is negotiable though, as the boats are upright. The machine he's working has pentacles as gears (each consists of earth, air, wind, fire and spirit); this shows that he has the power to control events in his life. The lemniscate as a machine, depicts change and movement as being necessary fodder for harmony.

Another way to look at this card, is that the man is moving as if he's on unsteady ground; yet the ground looks solid and stable, thus any turbulence he's experiencing is caused by his own lack of stability, or his own perceptions. Additionally, maybe the look on his face being less than happy despite that it looks like a fun activity he's engaged in, is due to that he's aware that he should be doing something more productive, and feels a little uneasy.

A common theme of the Two of Pentacles depicted: imagine life as a long running play... but in this play, just the one scene plays over and over, and thus, quality of life is held in suspension until the actor moves on to play the next scene. What kind of a play, what kind of life would that make for? Dull, shallow, lacking substance. Preposterous of a concept? Maybe, but we've all been there... perhaps a relationship, though weak, is hard to let go of; we hang on in the hopes that things will improve, but the same issues arise over and over. Or perhaps a job pays lucratively, so one  hangs on, but an integral working relationship within that job sucks to high heavens... there's no doubt about it, it's hard to move on at times.

The Thoth Two of Disks


The Thoth Two of Disks card is purposefully a card of dualities, to illustrate that one of our great tasks in life is to strike balance and create harmony. A main premise of this card, is that change is integral to stability. Its astrological attribute is Jupiter in Capricorn, which is not well dignified, but otherwise the elements of this card are upbeat and positive--especially that Jupiter itself is strongly benefic. Thus ultimately the message given, is that despite one experiencing a circumstance of uncertainty or difficulty, they have all they need in terms of resources, to make things right.

Reflection on what one invests their time and effort into, as well as how they interact with those around them may be necessary. Do they assign priority to important matters in their life? Meaning, does their life actually have substance? is it taking them where they want to go? Are they working to create harmony in areas where it lacks? Additionally, a failure to see eye to eye or a failure of understanding, between the querent and a person around them, may be focal here. At its absolute best dignity though, this card embodies balance and harmony, thus contentedness or happiness.

The Thoth Two of Disks Symbolism


Ouroboros's message is multifold, he symbolizes balancing light forces with dark, the cycle of life, death, and rebirth; and as well he represents wisdom, immortality, and eternity. In this he depicts movement and change being necessary, and resolving difficulties as they arise is key as well. Furthermore, the Ouroboros serpent relates to moon phases, given its cyclic nature; which in turn refers to mankind's passage through time; time itself is referenced within that. Ouroboros's pose, which represents both beginning and end in constant motion, is symbolic of one's journey through the paths and spheres, and also of the greater universe, as his crown is Kether, the crown of the Qabalistic tree. Ouroboros's crown additionally symbolizes victory, wisdom, mastery, legitimacy, and immortality; the crown's color relates to Tiphareth, and in that, harmonized consciousness. As well the crown is another reference to time, as the Egyptian Deity Seshat wore a crown of seven points, and her function was relative to time--recording the number of years a pharaoh reigned.

The lemiscate represents infinity; at the same time it is a multi dimensional image rather than flat, which brings to mind a Klein bottle--which being a fourth (or fifth, depending on how you consider it) dimensional object, is representative of enlightenment and higher awareness. The lemniscate could also be compared to the Mobius strip, which could be interpreted as a caution against immersing oneself into activity that will bring one right back to where they began. Then we have the yin & yang symbol, which alludes to working with the elements, and also to balancing any and all dualities.

As for color, pink, a central color in this card, is symbolic of love. It is not a bright pink, it is intermixed with white (wisdom), which urges us to use discretion in applying love, and as well symbolizes there being wisdom within demonstrating love. The black is Binah, the mother who holds potential to beget anything this universe has to offer; she urges us to learn to fully assess our problems in order to properly solve them. That the two voids are one pink and one black, depicts creating balance through love and understanding. Purple points to Yesod, which alludes to creating stability in embracing change. Then we have a deeper purple or indigo, which on one hand is symbolic of spiritual awareness and intuition, and on the other, it hints at Chesed, which in the context of the Two of Disks, reeks of being stuck in a comfort zone (Chesed's cozy warm waters). Magenta symbolizes emotional stability.

Lastly, yin & yang is about balancing light with dark, male with female, balancing dualities and contrasts, and working with the power of the elements. As above, so below, as within, so without; such concepts are based upon one reflecting the other. That's why one yin yang disk moves deosil and the other, widdershins.

Hathor came to me during the writing of this. She is syncretic with Venus, by the way. She conveyed that within the message of this card, lies the concept that much can be solved through love.

The Two of Disks or Pentacles Dignified or Upright

The Two of Disks or Pentacles Ill Dignified or Reversed