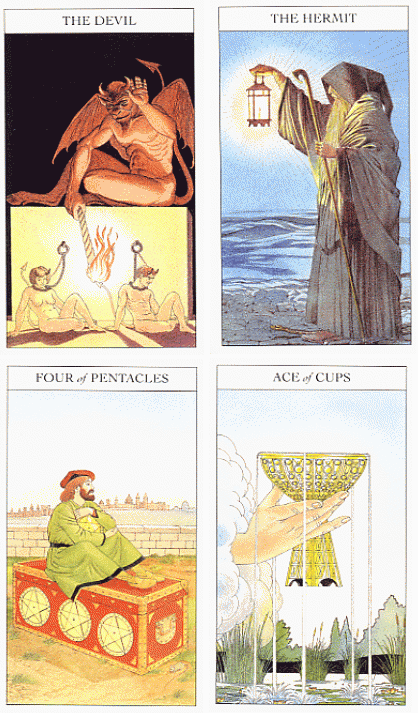 The Sharman Caselli Tarot in Review


The first deck I ever bought was the Sharman-Caselli tarot. It came as a book and deck set by the name of "Beginner's Guide to Tarot". The book was written by Juliet Sharman-Burke, artwork was produced by artist Giovanni Caselli.

When I bought the deck from Chapters, there was no example deck in the store; it was bought on blind faith that the cards would be as attractive as the image visible from outside of the package (the image on the package showed only the Two of Swords). When I got home and opened it, overall I found it quite pleasant. The graphics are well done, solid artistry, and there's a softness, a depth of calmness to them.

Most of the colouring of the deck is ideal - subtle and delicately evocative, but with somewhat of an overall monotone quality at times. The heavy use of one color or family of colors on some cards though, does appear to be intentional, and it does supply an interesting effect; this quality is most noticeable among images of the Wands suit, but you will see it in other instances as well.

The major arcana cards of the Sharman-Caselli deck are unnumbered; this would be okay for a beginner who really wouldn't be dealing much with numerical significance, but on the other hand, the confusion of being new to tarot and keeping their order straight may prove confusing. 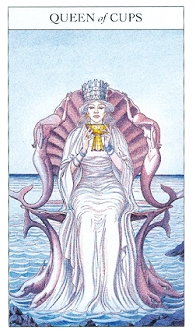 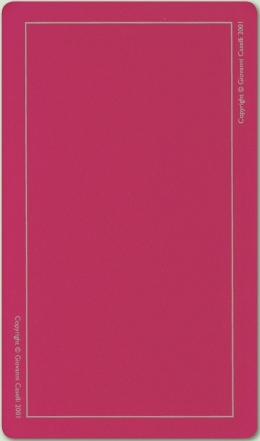 Though this deck is strong in artistic merits, it was not one I used exclusively for very long; the ultra heavy use of yellow in the Wands suit just wasn't working to my highest benefit. In hindsight I feel that it would be great for someone who had a chance to see it prior to purchasing, someone that's looking for a deck with subtle coloring, and someone who isn't distracted by images that are in instances dominated by one overall color or tone. This is not a deck for a reader seeking rich, varied coloring, or the occasional powerful message from subtle yet existent shock value.

There are some images from this deck that I really resonate with, to mention a few, the Tower (it gets the point across well), the Hierophant (his face showing the gravity of his position), the Two of Swords (she looks like someone I may know - friendly. familiar), and the brightly colored Fool.

The card backs are a plum shade of red, they have a thin, greyish inner border. The deck I have has one card with a huge white area with no color on it on one back, I have read that others have had problems with this sort of thing as well. Anyway, the card back design is perfect for those that read using reversals. The card stock is on the thinner side and has a silky feel to it, it is lightly laminated. Book published by St. Martin's Griffin, cards published by Connections, 2008.

There is a 192 page book accompanying the Beginner's Guide to Tarot set; it delivers a comprehensive look at tarot from a beginner's point of view. Though easily digestible for a beginner, there is a fair amount of food for thought for more advanced enthusiasts as well. Bottom line here is that this deck is exactly what it claims to be, which is a deck suited to introducing a beginner to cartomancy.


Copyrights to deck images belong to the holder, which is more often than not the publisher.

Posted by Metaphysicality Inc at 1:59:00 PM No comments: